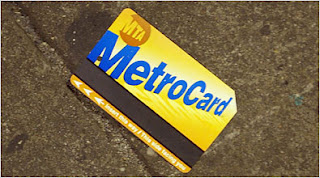 Back in May 2014 I suddenly stopped taking the subway on a regular basis. About the same time the MTA started charging a dollar if you didn't bring them a Metro card when you wanted to put money on it. Now that I'm back taking the subway on a somewhat regular basis I've made an observation that there are a lot less Metro cards laying on the floor in subway stations. This could be because people are keeping their valueless Metro cards for refill purposes, or that people are picking them up to save a dollar and they need a new card, or that the MTA is doing a better job at cleaning the stations. In any case, I'm not finding subway stations with their floors strewn with MetroCards.

However, when I do find cards laying around the subway the ratio of how many have value on them is about the same as it was before 2014. Between 5% and 10% of the cards I find sitting on top of the vending machines have some money or some days of use left on them. Also, I'm still noticing the same amount of cards on the floor in supermarkets, parks or places that are not subway stations. Those cards are still worth bending down and picking up. Every time I do that I remind myself that there was three years where I couldn't bend down and pick them up.

It's been a long time but I'm finally updating this.


It's kind of ironic but the MTA gave me a Metro card with my picture on it. I don't have to put money on it and it just comes loaded with eight swipes a day. I guess they'd rather have me on public mass transit then send an Ack-Stress o Ride to go get me. This past Saturday when I was approaching the starting line to the Brooklyn half Marathon there was a Metro car on the ground. I can bend down but it's hard to pick things up off the floor, so I compels my friend Josh to pick it up. He didn't need it so I wound up running the whole race with it in my pocket. I just checked it, and it's going to work till May 31. 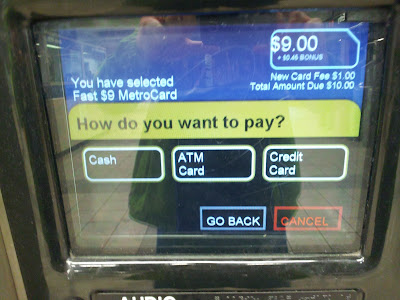 The other day I watched a guy freak out as he was trying to swipe his way onto the subway.  He kept swiping cards and  could not get in.  He slammed a pile of cards on top of a payphone and stored over the the machine and bought a Single Ride.  After he went through the turnstile I check the value on those cards.  They added up to over $20, mostly $1.70 cards and a few larger cards that had recently expired.  People just don't know that they can go over to the booth and get them combined. (12-25-11)


In the sidebar of this Blog I list the sum of the value of the MetroCards that I find. If I find 5 or 10 cents in a given day I don't post it, I wait till it adds up to something worth typing.

I would like to point out that I believe that every MetroCard that I find was lost by somebody. They were not put there for me to find. On more than one occasion I found some valuable cards (Transit Check Gold) and moments after I scanned it at the reader I saw a desperate individual looking at the ground in a subway station. Asking that person if they lost their MetroCard and returning it to them was more satisfying that riding for free for the rest of the month.

I think the design of the MetroCard lends itself to getting drooped. It is the thinnest thing in your picket. If you keep it with your cash or keys it can slide out without being noticed. I would urge everyone who uses a MetroCard to use a MetroCard holder of some sort.

That said; finding value on MetroCards is like winning at gambling without the risk of loosing your own money.

If you are interested in doing this either for sport, competition or to save money or to supplement your income; here is some advice.
I once found a Transit Check Gold MetroCard. It worked for 3 and a half months. The original owner did not tell their payroll manager it was lost. But most of the monthly MetroCards I found did not work for as long as they should. The original owner contacted the MTA and reported it lost. They got a prorated refund. I was kinda glad.

Whenever I find a student MetroCard or a Senior/Disabled Card I hand it to the "token clerk". They are issued to specific individuals and it is against the law to use them.


Karma works both ways. If I ever see someone looking for a "swipe" to get them on the train, I always give them one. Also, I befriended a man in my neighborhood of little means (I don't believe he his homeless). We started talking about all the things that can be found. I told him I find lots of MetroCards. He did not even know what they were, he has not ridden mass transit in years he said. Now he picks up MetroCards and keeps them in his picket till he sees me. I do not give him the value on them. I give him 10 times the value on them or $10, whichever is greater.

I asked this question to the MTA:

Are there any regulations against


1. Picking up discarded metrocards from the floor of a subway station or on the top of the metrocard testing machine?
2. Asking the booth attendant to combine them into a usable amount?
3. Using them for personal use?
4. Giving them to a friend or family?

This was the response I got:

Response (Melissa Glasgow) - 05/06/2009 03:21 PM
This is in response to your recent e-mail message to MTA New York City Transit regarding MetroCard.

As you may know, you may have uneven balances of several Pay-Per-Ride cards (that you have previously purchased and hold primary ownership of) moved to 1 card at the service booth of any one of our stations. You may only process 5 cards at a time (four old+ the one that the remaining values are being transferred to). This limitation exists to prevent fraudulent activity. You may also send your MetroCards to MetroCard, 2 Broadway, Room B11.59, New York, NY 10004. Due to fraudulent activity at our MVMs, this transaction/feature was removed from our MVMs, several years ago.

However, under the circumstances you have described, the station agent has the discretion to refuse to perform the transaction and summon NYPD Transit assistance, if he/she suspects fraudulent activity at our booths and/or turnstiles.

Thank you for having taken the time to contact us.

I asked what law I would be violating. The responded by telling me to submit a Freedom of Information Act request:

This is in response to your recent e-mail to MTA New York City Transit requesting information regarding the MetroCard tariff and the laws surrounding it.

We hope this information is helpful and thank you for having taken the time to contact us.

See more information in SubwayBlogger.com ,Yelp and The New York Post has an article about a women who finds cards. The New York times has a story about Single Ride Cards and refills. AM New York says the MTA is budgiting $48 Million in extra money from lost and unused MetroCards.  The Daily News thinks this is news.
Posted by ChickenUnderwear at Friday, July 21, 2017