I AM calling this is my 33rd marathon

Full disclosure: On Sunday I participated in an indoor marathon relay. It was held on the Armory track in Washington Heights. As I understand the rules the marathon distance was 211 laps of the 200 m track and every team had to have eight people and everybody had to run three times.I was probably the slowest person on the track that day and ran the fewest amount of laps. I ran 400 m, three times at about the 18 minute per mile pace. Yeah, my contribution to this marathon was about three quarters of a mile.

My first memories of the Washington Heights Armory were running high school tracking meets there. First, I remember the stench. The three-hour subway ride from Sheepshead Bay already smelled of BenGay from my teammates warming up and stretching on the QB train. But when we got there we all put a little BenGay above our upper lip to mask the smell of the cots that were on the infield that were filled with sleeping homeless people at night. The track was just paint on the gym floor, and that floor was so in need of maintenance that the air was filled with sawdust. For some reason the coach had me do the 2 mile race walk. I was so slow I remember being waved off the track so they can just start the next event. 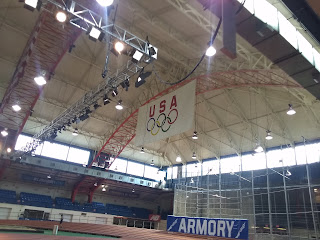 Fast-forward 25 or 30 years and my kids are now on a youth track team. The teams indoor meets are held up at the newly refurbished Armory in the mostly gentrified neighborhood of Washington Heights.

The track was built in Italy and reassembled  to be the fastest track in the world. I'll never forget the question my son asked me as we walked in and saw the flag with five rings on it above our heads. "Daddy, is this an Olympic place". "Yes, this is where people become Olympians." The flag still is there. 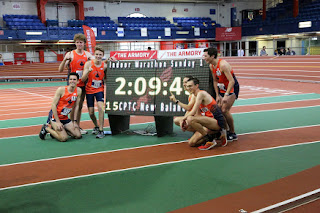 The day before the individual marathon competition the male world record was broken and the fastest woman came within a minute of breaking the indoor record for her gender. This leaves me pretty humbled. I was about to run on the track where less than 24 hours earlier a world record was set. Then I find out that the team I am competing with from The Central Park Track Club is attempting to break the relay record. They smashed it by about 10 minutes and then posed with the clock.I wish they would've put a WR on the clock (I don't care that one of my friends pointed out that this was a bullshit record. I don't care that the next day the winner of the Boston Marathon was over a minute faster. I really don't care that a bunch of collegiate millers could have done it 20 minutes faster. They didn't show up) 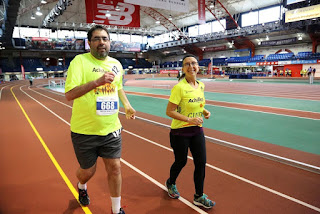 I didn't think I would need a guide. But when Linda volunteered I found out I needed one. I was physically and mentally unprepared to run on the banked track and I'm sure having her there kept me from making a fool of myself. Also, when you're focusing so hard on running and not falling down the side of the banked track it's hard to count to 2.

I would also really like to thank the people at Achilles reporting this together. Rebecca who spent her whole day there getting us all to face in the right direction (talk about herding cats!) And I like to point out something that not many people noticed. That Michael Anderson put two teams together that finish within about three minutes of each other. 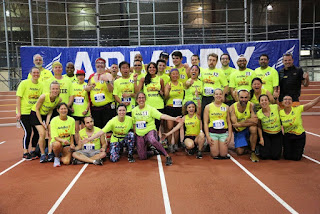 To the right is most of us. Two teams and everyone's guides and some more helpers that came.(Of course, Larry Sillen is not in the picture as he took it. He took the rest of the pictures on this post as well.)

These are some of the bravest and kindest people I've ever known. Since I detest that expression about clouds and silver linings I've come up with my own.....  Getting Guillain-Barré syndrome was like being handed all the lemons in the world and Achilles provided the sugar for my lemonade.

Posted by chickenunderwear at Tuesday, April 23, 2019