Fuck YOU, Donald Trump Fuck YOU

Trump, Donald Jr, Kimberly Guilfoyle and others watching the crowd getting fired up hours before they stormed the Capitol, and dancing in enjoyment while the song Gloria is playing. Seems premeditated, no? pic.twitter.com/E6tHufOjiN

So here's the full audio of Trump's conversation with the secretary of state of Georgia. I can't dispute the legality of it because I'm not a lawyer but I am a human being so I can dispute the humanity. Or just simply how can anyone not see that Trump is batshit crazy. Just confusing himself with the nation and not caring about right and wrong only himself.  I challenge anybody to tell me that what he's doing is good or right

The only thing Trump is accomplishing is making his followers distrust our democracy. Everybody but them knows that he never wanted to be president but now we has to stay president in order to stay on top of his game. He might not be prosecuted as a private citizen but a lot of the information is going to come out.
At this point all he's doing is making democracy look bad. This is what our enemies want

There are many reasons is bad that Donald Trump retweeted this. Never mind that it's a photoshopped fake ad. Nevermind that is reproducing the hateful stereotype that Biden is frail. What really pisses me off is that it reproduces The Stereotype that using a wheelchair is a sign of weakness. I use one of those for about a year and I hated it but it was a tool. I wasn't confined to a wheelchair. It was not a prison. It allowed me to escape my prison of indoor confinement. It allowed me to go out and do stuff.. So double FUCK YOU to Donald Trump. That shit and his supporters have done so much to destroy the lives of the disabled. People are disabled. It's not the end of the world. Who knows what illness is Trump has. The fact that he hides them makes other disabled people look bad 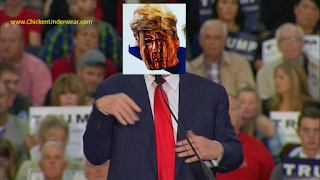 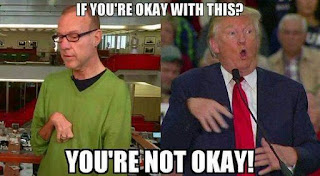 A long long time ago there was a giant apartment complex called The Trump buildings. They were kind of on the edge between Brighton Beach and Coney Island. I knew I had full people that live there. They weren't the goldplated buildings of Donald Trump. They were the affordable housing created by his father, Fred. According to my sources, Fred used to show up at the staff holiday parties and shake everyone's hand and give everyone an envelope. When it was time for the senior Trump to step down, the staff in these buildings (who could afford it) quit. They walked away saying, "I ain't working for that putz."

If you don't believe me you might not believe the New York Times either.

To all the people who believe in Donald Trump, here's the real question: If he were to take out his schlong and takes a wiz all over the stage at the next debate, will you still have a reason to support him?

Let me try to get this out of my mouth. I don't have a problem with people being ass holes, I have a problem with people thinking that an ass hole should be President. I'm not really worried about Donald Trump becoming president. I really think that when people go to the polls and actually vote they will pull the knob for someone else. I am bothered that there is a large chunk of people who continue to support a man who lies just to stir up the hate. He didn't see any Muslims celebrating in the streets of Jersey City on September 11, 2001. It didn't happen. If it did we'd all be looking at the videos. The New York City area was in chaos, no one knew at that time that this was an attack by religious fanatics. Let alone what religion they were. I don't really care that Donald Trump wants to keep repeating this, what bothers me is that people are starting to believe it.
It's clearly a pattern with Donald Trump that if your reporter and don't make him look good he personally attacks you Then he denies you and your media outlet his interviews. Since people are only watching the news to see what kind of stupid thing he's gonna do, the networks are afraid to offend him.  Which means they're afraid to call him out on his lies. He didn't like the what Megyn Kelly asked him questions, so he said some pretty nasty things about her. It blew my mind how her bosses let this go.

And now Donald Trump is making fun of another reporter that would backup his story.

This really bothers me a lot. You see, the guy on the right has arthrogryposis, which visibly limits flexibility in his arms. I have acute motor axonal neuropathy. And while I've been bragging about how I've been walking further and doing better in the gym, the damage to the nerves in my hands is much more serious. My hands and wrists are showing severe signs of atrophy, like Serge Kovaleski. If the axonal damage in my hands doesn't reverse soon I will look a lot like more like Serge.

When you choose a president, choose a role model. Choose a person that you want to be your leader. 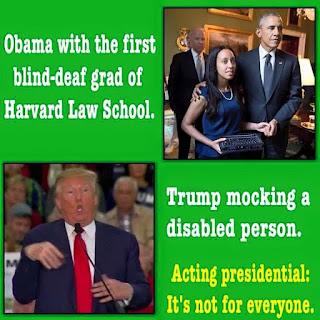 It saddens me that people are choosing a leader as nasty as Donald Trump.

Yeah, look to the right. Who is your role model? Do you want to live in a country that is led by a man who mocks the disabled? Who encourages people who disagree with them to be roughed up?

They say people choose leaders who emulate what they think is best in themselves.Is this who you want to be? A thug? Who at his best makes fun of people and at his worst has been beat up.

What I'm trying to say is that Donald Trump's popularity really frightens me. It's one thing for a politician to lie so that they get a little extra money were to cover up a mistake they might've made. But Donald Trump is making up stuff to change the agenda of the American public. He saying stuff about Mexicans and Muslims that just isn't true but people start repeating it like it's true.

People, it's not okay to mock the disabled.

People aren't crossing the borders to figure out how to rape your daughters.

Refugees are going through a more strenuous vetting process than your wives.

One faith is no worse than any other religious people when it comes to doing stupid stuff.

People, if you want to know what happens when a potential leader makes stuff up about other people in order to generate hate, look to Germany in 1928.

Posted by chickenunderwear at Friday, November 27, 2020