I couldn't of done it without you

A few weeks ago I finished my 32nd marathon, my third since recovering from GBS.

It was the Brooklyn Marathon. It started a few blocks from my house and most of it was in Prospect Park. I run the Brooklyn Marathon before, unofficially on the day the New York City Marathon was canceled because of Superstorm Sandy. I was one of a handful of people who knew exactly where the starting line was. I jogged down there and waited for someone to walk by and asked them for a favor. "I'm about to run a marathon, can you please say the word 'GO!'" "I completely understand" he said, "RUNNERS READY, GO!" He applauded as I ran down the road. It was my fastest of five marathons in 2013 and while I had prepared myself mentally for going up the hill so many times I was almost knocked my feet in pain the last two times I had to go down the hills. Two weeks later I was course director and lead cyclist for the official Brooklyn Marathon.

For the 2018 Brooklyn Marathon I started three hours before everyone else and did the course out of order. I did two laps of Prospect Park at 4 o'clock in the morning and then made it over to the starting line for the 7 AM start. Like five years earlier I didn't anticipate how much it would hurt to go down the hills so many times. It took about 10 1/2 hours and even with a three-hour head start I was still the last person to finish. That's all I really have to say about the race, other than the fact that I paused my watch for a few minutes to sit on the stoop and eat an apple at about the 18 mile mark. 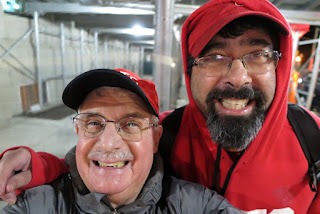 I couldn't have finished without Larry Sillen:

Larry walked every step with me and only took 1 million pictures. Here's a Selfie we took at 3:45 AM in the rain. He had already walked a mile because the trains were screwed up he met me at my front door. (The bus that replaced the train was also FUBAR because it had to go around the marathon route.) 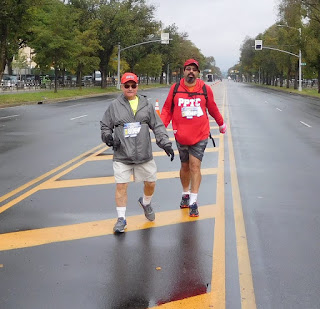 He was literally there for every step I took. Making it clear to me that he was here to help me in any way I needed. He let me ramble on for the first 15 or 20 miles and then accepted my solace for the last few loops of Prospect Park. Here we are on Ocean Parkway still heading away from Prospect Park. You might not be able to tell but there's no one left on their way back for those three or 4 miles.

Every time I got to the top of the hill in Prospect Park I was only a block from my house. There is absolutely no doubt in my mind that if I wasn't with Larry I would've gone home.

Can you read my lips? "Dude, I love you"

I'm 55 years old and I finally have a role model to show me what selflessness is. 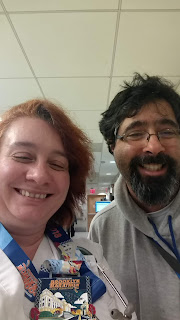 I might not have lived without excellent medical care

Some people say that my recovery from GBS is miraculous. I'm not a believer so I don't use that word. Medical science kept me from dying and helped recombobulate me to the point where I could walk and feed myself. But there's a difference between not dying and living. And the staff at NYU Hospital/Rusk helped give me my life back. I just started volunteering their so the timing was perfect for me to hand out finishers metals to the people who helped me earn them. My memories of being a patient at Rusk are spotty. When I was at my worst physically I remember getting myself to standing using a giant plastic ball to grab onto. My kids happened to be there and I remember the therapist saying "There is no crying in PT" but, we all cried because were all humans.

The food at Rusk was pretty good. Every morning you gotta paper menu so you can choose your meals for the next day. One morning my nurse picked up the menu. I told her that I had already filled it out with the nutrition people brought me my food. She said she knew that but she wanted to circle some more stuff so she can start having breakfast with me. I also remember how Ludmila freaked out when she saw my fingernails were discolored. She suddenly thought I had a new medical condition. No, it was just that my daughter and her BFF gave me a manicure.

Since I was the last finisher in the Brooklyn marathon it was okay for me to take home extra finishers medals.  Over the past few weeks I give them to some of my old therapists. I remember saying to them that one day I would finish in of the marathon and I come back and give you my medal It was literally a dream come true to give Ludmila one of my finisher medals. I never thought one human being care for another so well that they were actually related to. 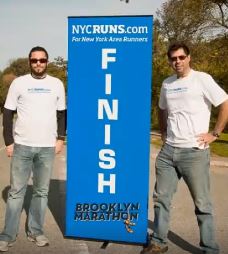 It would never have happened without Steve Lastoe.

I couldn't of done this without you because without you it never would've happened. I hundred years ago you invited a bunch of Brooklyn running people to a bar bar to talk about organizing a marathon in Brooklyn. Everyone talked about their fantasy routes through the streets of Brooklyn but nobody knew how to close roads I knew how to organize a race for 1500 people doing 10 miles in Prospect Park. So we started by doing something we knew how to do. To the left is a picture of Stephen and I as teenagers posing for a newspaper reporter. We organized a race for a few hundred people going around Prospect Park for 26.2 miles. 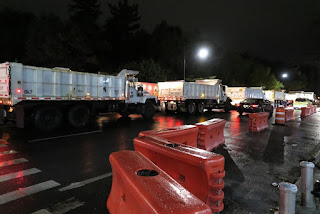 At 3:45 in the morning I saw the caravan of barrier vehicles  getting ready to deploy and protect the race. Then at 6:30 AM I got to  the starting line and had to pass the bomb sniffing dogs and people queued up to go through metal detectors. I had to walk past thousands of runners so I can get to the side of the starting line. I felt pretty good. I already had 6 1/2 miles under my belt so I only had less than 20 to go. I looked out of that gigantic crowd and realized I helped push that seed into the ground. The seed that grew into this giant race. Then Steve made prerace instruction speech and actually pointed me out that I had been there from the beginning. I was there the last four and half years it would've been a lot of fun. But then I wouldn't of been able to have been the last finisher in the first marathon on the streets of Brooklyn and over 100 years.

When I was at mile 25 Steve jumped out of his truck to walk about a quarter mile with me. I made a promise to get me a ride home because I surely didn't have the energy to go up that hill another time. 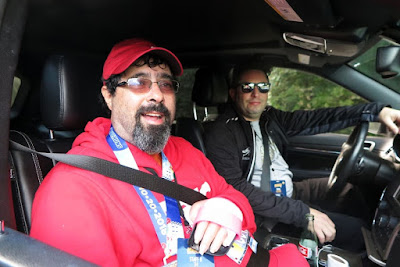 Posted by chickenunderwear at Thursday, November 15, 2018