The title of this blog is the greatest universal truth of all time. Hard stop.

But, lately I've seemed to have gone to a bunch more than usual.

In the past few weeks I attended two funerals. I kind of went to both so I can be counted among the people who cared. I guess it was important to me that their very close family and friends would see how many other people cared about their lost loved one.nAs I listened to these people take turns telling stories about how their departed loved one brought joy to the world or gave them lifelong lessons I found myself a little distracted. You see, back in the fall my father died.

My father and I never had a good relationship. It wasn't terrible, but for the most part all we did was try to piss each other off. Maybe the value in my father's relationship with me was in that I sort of hada negative role model of something not to repeat with my own children.

My father was sick for a long time and I periodically give some thought to what I would say at his funeral. Something much nicer than "he showed me what I didn't want to be". But the last days of his life and the funeral became such a religious shitshow that I didn't think I was capable of standing up and saying something of any value, let alone unoffensive to anyone in the room

But seeing the silly meme to the right and spending time at other funerals give me some time to clear my head. 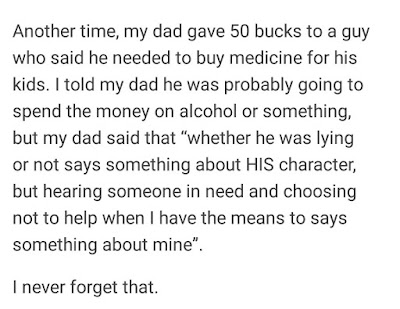 The following is an absolutely true story that I never told anybody.

I was with my dad a long time ago....... It was probably the late 70s and we passed a guy who at the time would've been called a "wino". A drunk homeless guy dressed in rags shaking a cup. My father gave him some loose change. I said something like," Why did you do that, he's just going to buy more booze with your money?" He said," The guy has absolutely nothing. It's okay if he wants to be drunk."

I never forgot that
Posted by chickenunderwear at Friday, January 25, 2019