It also says Bell Atlantic and New York Telephone two of the companies that eventually became the current occupant a phone service in New York City, Verizon. Yeah, some real artifacts there. It's been decades since they installed phones with dials Tama you still want to in Brooklyn or called the phone company Bell Atlantic in New York City.

But there's something new and great right next to the phone. Next to the doors of the restrooms there's this sign. My crappy cell phone photo makes it hard to read but below are the words that are on signs like this all over bathrooms in New York City 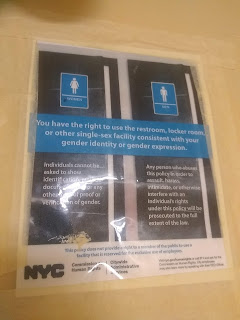 In the big picture it really doesn't matter if there's a telephone in a park building that has obsolete messages on it. But I'm really glad my kids are growing up in a world where people could go to the bathroom that works for them

Posted by chickenunderwear at Thursday, September 19, 2019