I took my camera for a run back in time...

This morning I thought I was gonna have a usually run, but as usual I ran across some interesting things. (Did you get that pun, I put it in italics.)

On my way to the Brooklyn Bridge I had to make a "pit stop" so I ran into the bathroom at the back of The Brooklyn War Memorial (thanks bridge and tunnel club for the photo.) The back looks nothing like the fr

ont, it is a simple red brick building with a door to some park offices and a bathroom. No big deal. But there is more, I think I found the oldest working payphone in Brooklyn, if not NYC. How do I know it is so old.

First of all it has a dial. Dials were reintroduces in the roaring '90 because beepers were very popular. One would "call" a beeper and enter you phone number on a touch tone keypad and the person you "beeped" would call you back at the number you entered. This became very annoying for the regular folk who just wanted to use the phone and the property owners did not want those "beeper types" hanging around. It was not just doctors who carried beepers, but they did deal in drugs. An 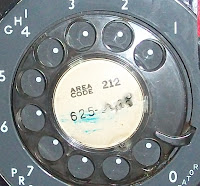 y of you youngster remember that.

But there is something that makes that phone even older. Look at the phone number. (I blurred out some numbers, for a reason I do not know.) This phone is in Brooklyn, our area code is 718, this says 212, like Manhattan. Way before beepers got big, the whole City was 212, there was this huge deal that we were running out of phone numbers

From Wikipedia: "At the time of its creation in 1984, the 718 code was assigned only to Brooklyn, Queens, and Staten Island; the Bronx joined 718 in 1992. Manhattan cell phones can also fall under the 718 area code." This was a big deal in 1984, I remember my parents did not want me calling Manhattan because it was "Long Distance". We don't even have that anymore. 718 was the first new area code and we all thought it was gonna be the only new one. Who knew that everybody was go 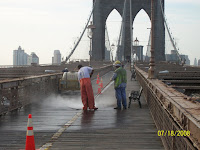 nna get a cellphone, fax, modem line and a credit card machine.

So i kept running; Good news!!! They are repainting the lines on the Brooklyn Bridge. I wont get hit by a bike that is swerving to avoid a tourist.

When I got the The Battery, I thought I really went back in time, way back. Back to when wild animals roamed Manhattan. I was face to face with a turkey and I had a camera. 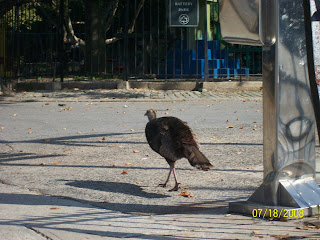 My teammates have seen it before, but I would like to confirm that they were not having a flashback or experiencing runners high.

This picture was taken between the Staten Island Ferry and the Coast Guard's building. Her name is Zelda
Posted by ChickenUnderwear at Saturday, July 18, 2009