Today I became a Subway Geek 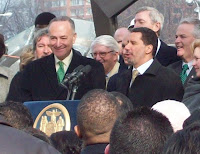 Really, the new station opened today at South Ferry. I figured I would check it out. I got there just in time for the speeches. Gov Patterson was the MC and did a fine job keeping things moving. When he introduced Senator Schumer and said that "California has a 'Terminator' for Governor and New York has a 'Stimulator' for a Senator". They both then giggled so much I thought they were more than political allies, more than friends... I think they are having a bromance.

Kirsten Gillibrand said that the new station would allow a free transfer from the ferry to the 1 train. I think this was our new Senators first ride on the subway.

I was gonna sneak into the new station with the politicians and the press but decided not to. In the unlikely event that I got cought I might not have been able to pick up the kids at 3pm.

But it was only 10:30 and the first train was gonna use the station at Noon. So I gotta 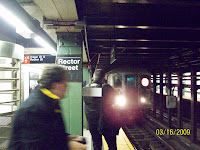 snack and walk up to Rector St., the second to last (or second) station on the 1 Train.

That is where I met the Subway Geeks. They (we) all had the idea that it would be cool to ride the first train into the new station. So we did. It was cool. 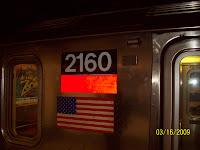 the last train into the old station.

This is the number of the last train into the old station. The other subway geeks made a note of it, so I took its picture.

Here are all the pictures I took.

When I was done being a Subway Geek, I looked around to see if Chuck Schumer was around. I would have asked him he he could drive me home or wanted to go out for a beer. He looks like a fun guy.

There are plenty but I am photoed in The Railfan Window Blog.
Posted by ChickenUnderwear at Monday, March 16, 2009