The Brooklyn Bridge Needs a Staff


Today She turned 127.  If you want to know why that is so wonderful you could check out my friend Rundangersously or my fellow blogger McBrooklyn or you could read a book like The Great Bridge.  The Brooklyn Bridge is a big deal. It was build without electricity, not just without computers, but without light bulbs.  If you walk across it you can touch the same cables that it has been hanging from since 1883

I don't have David McCullough's book in front of me to quote directly, but I remember the last paragraph.  In 1969 there was an interview with a 100 year old women.  She was asked what she thought of the fact that men were walking on the Moon.  She said she was unimpressed, she was there when they built the Brooklyn Bridge. 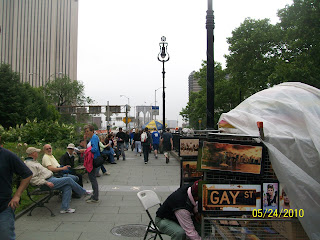 Today I ran across it.  There was no birthday party going on.  In fact, I don't think anyone even knew it was a special day.  I asked the man selling photos if he knew who old the bridge was.  He pointed me to a plaque on the ground.  I repeated myself and said "I want to knew if you know that today was her birthday."  He smiled and we looked at the plaque together.  He shook my hand and thanked me for telling him.  "It is good to know." 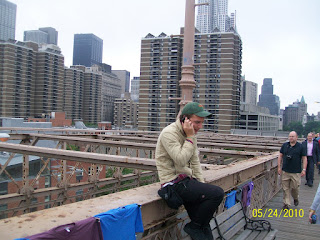 I would have asked this man selling Brooklyn Bridge shirts, but he would not get off the phone. 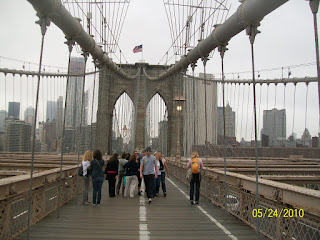 On my run back across the bridge I slowed down and observed two things.  First, that as usually, the tourist on the bridge were totally oblivious to the fact that the North side of the "walkway" is in fact, degenerated for bicycles.  But, more importantly, I stopped and spoke to some tourists.  None of them knew it was the Bridges Birthday.  I am sure it would have enhanced their stroll across the bridge if they new it was a special day.  When I got off the bridge at Prospect St there were about 20 people just staring at the new maps down there (thanks DUNBONYC on Flickr.)

I stopped and gave them all directions.  Some wanted to go to that great Pizza Place that they could not remember the name of , others wanted to go to the Promenade,  one family just wanted a bathroom and a couple wanted to find the metro.  I helped them all.  I even told the the guy who wanted a "metro" that we have a subway and there are two within walking.  I could have stayed on (or at the foot of) the bridge all day.  I would have been continually giving directions and tourist advice.

So there is Marty Markowitz, Brooklyn Borough President, showing off those new maps in May of 2008.  His office of Brooklyn Tourism is A ONE MILE WALK AWAY.  Why aren't we giving tourist advice at the foot of the Brooklyn Bridge where tourist enter Brooklyn?  Why are we expecting them to find a barley marked building?  I guess the territoriality that comes NYC makes it this way.  The pedestrian path on the Brooklyn Bridge is under the control of the Dept of Traffic, like the rest of the bridge. The do an adequate job of emptying the trash cans and a poor job of painting lines to separate the bikers from the runners/walkers.  The Dept of Traffic is not about tour guides or park rangers.

But under the Brooklyn Bride is this brand new park called (drum roll please...)  Brooklyn Bridge Park. That park is massively over staffed.   How about the City transfers whatever it is called from the Traffic Dept to the Parks Dept so that they can put guides and/or rangers on the bridge.  Tourists would be happier (and they might spend more money) and commuters would be happier (they might not crash their bikes into so many oblivious tourist).

I even got a plan on how to pay for all this.  Charge places like the McDonald's on Court Street to to use images of the Brooklyn Bridge. Is there anything less Brooklyn than McDonald's.  Forgetaboutit 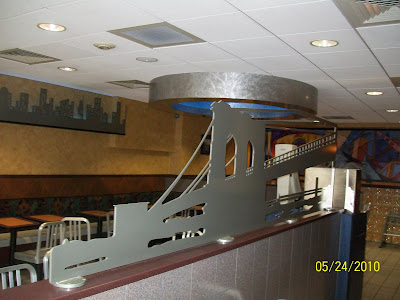 I am gonna email The King The Mayor.  Maybe this can turn into a job.

Posted by ChickenUnderwear at Monday, May 24, 2010