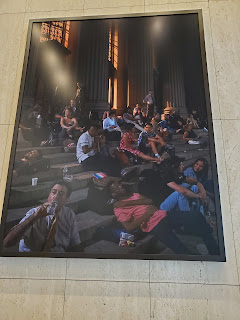 I'm updating us because last week I was asked to help out with some more ballot-counting watching.  I don't know how helpful I actually was for the Brad Lander campaign but I did show up when I was told to. So they asked me to show up where actual work was needed to be done.  The 9th city council District that represents mostly Harlem and the Upper West Side was a victory for the progressive candidate by only 140 votes.  This triggered an automatic manual recount.

Here are some details on that election and I'm surprised there is not much news on the recount process because it was quite complicated. Since they were 13 candidates they were actually 13 rounds of recounting. It took two weeks.  I was there for 3 of the days.  The job of us poll watchers was very literally to watch the poll workers. As they counted every ballot they held it in the air and indicated who it was cast for. Then they wrote down the results and walked them down to someone entering them into a computer that was really only doing the arithmetic. We kept the same tally and entered the data into our own computer that was running a parallel program.

I was really glad I got to help.  Not because I got to contribute to a victory, (and honestly, my contribution was teeny). Because I got to meet a  few young people who are really trying to make the world better. They were putting in the hard tedious work to improve everybody's lives. Also, I got to see how the old world of racist sexist homophobic people is just going away. The world is going to get better and I got to work with the people who are going to do it. it was really nice to be with a bunch of people who look past each other's differences and at each other's strengths without even thinking about it.
Also, there was a lot of down time and everybody took out their phones. I went on Facebook and saw as one of my old high school classmates posred to be one of those  stupid things that asked if our lives were better before everyone had a cell phone. I told my new friends what I was looking at and told them my comment.  I told my high school friends that these young people was staying on task they were working on a phone and a laptop at the same time and communicating with each other and people in other places doing the same things as they were.  They weren't off in their own worlds, they were multitasking. And they were damn good at it

And so while the rest of this blog post is about architecture and geography I'm going to go there now. This recount took place at 450 West 33rd Street in Manhattan oh, at least that was his address until 2019. The building was built in 1969 and rebuilt in 2019 when it became 5 Manhattan West, part of Hudson yards.

From the outside and in the lobby of the building one would think you were in a brand-new building. But when we went upstairs to the 8th floor which was shared by Amazon and the Board of Elections we walked into the BOE room and I thought they made an old room in a new building. Until I found out that the Board of Elections was always there and they just renovated the building around there Warehouse.  Speaking of the lobby I was really taken by the piece of a giant art that hung there.

So I took out my new phone with some super duper camera that doesn't work too well with my crippled hands but I took the picture up there. The guards in the lobby yelled at me after I took the picture because you're not allowed to take pictures in the lobby.  I did look closely at it and couldn't find the name of the artist or the name of the piece. But the work of art struck me it made me think about how democratic (small d) a public place could be. From a distance it looks like a painting but when you get closer you think it might be a photograph. I'm not really sure which it is. And from a distance it looks like it could be 50 years old but when you get closer you realize there are people looking at cell phones.  I'm going to post this update but I might post another one when I figure out who took that picture or painted that canvas

Last week I worked for the Board of Elections as a seasonal poll worker. I wrote about it in this blog.

This past week I turned my hat back around and helped out my old friend Brad Lander in his campaign for New York City Comptroller.  In the past I helped raise money, I also stood in public places and got citizens to sign the petition to get him on the ballot and once I even woke up early and stood outside Thompson Square Park and pointed potential voters at him so they can shake his hand. (I've got to say that the corner of East 7th Street and Avenue A is probably the most fun place to stand at 10 on a Sunday morning. Probably one of the most diverse places in the most diverse City on the planet.   There was a guy who asked me if illegal aliens could vote. I said no but Welcome to New York City anyway. He looked at me sideways and said, " but I'm not really here."
Anyway,  I helped out by going up to the Bronx Board of Elections office and officially observing the opening of the absentee ballots. I went to a Zoom training and explained that I had never done anything like this before and they explained that was okay. because Brad was ahead in the early count by a lot and they weren't really worried about any  shenanigans.  Just to report back if I saw anything unusual. I said that I didn't know what unusual was because I had never done it before. They told me if anything unusual would be happening everybody in the room would know it.  I actually reported back that there was not only nothing unusual going on but there wasn't even anything interesting. Election workers were opening envelopes pulling out the ballots and showing the people who were watching that there were no extra marks on them and then putting them in a pile to be scanned. However, I lied.  The building itself was actually very interesting. The Grand Concourse is kind of on a cliff When you enter the building from the front it is a four-story building. However most of the action was in the lower levels and they were five of them. From the Morris Avenue side of the building it was a nine-story building.
This is what I look like when I walked in the front of the building. Also note the subway entrance right next door. (straight shot from Park Slope to the Bronx on the B train) 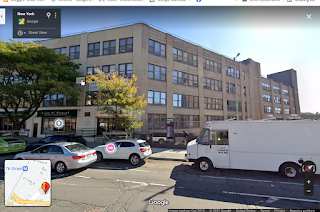 This is kind of what it looks like inside. 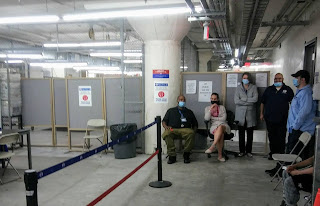 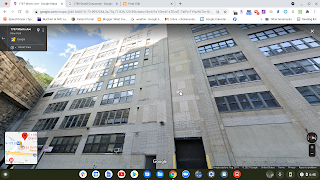 And here is a picture of the subway going under the Grand Concourse and over Morris Avenue. I think this was unusual but the Brad Lander campaign wasn't interested in this stuff 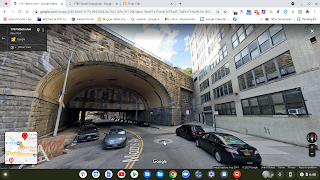 I would have gone back and taking these pictures myself because I was supposed to be there on Wednesday as well. But the campaign asked me to go to Queens Borough Hall to pick up the final numbers from the evening before. Other people found things interesting in Queens and the New York Times even stood next to me and took this picture. I know the photographer was standing next to me when the photo was taken because he was scolded when he took the picture 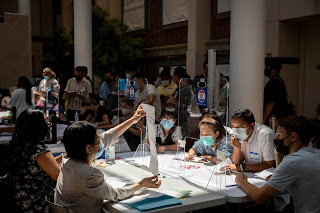 Other things of interest to me was the fact that I got to take the subway from 59th Street to 125th street without stopping. It is arguably the longest trip you can make underground in New York City without stopping 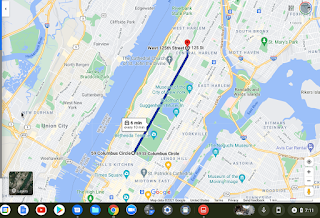 People often forget that the F train is like a railroad in Queens and it makes four stops to go like 7 miles from 21st Street to Kew Gardens. I got to take this trip on my way to Queens Borough Hall 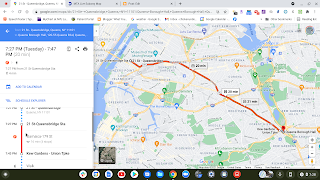 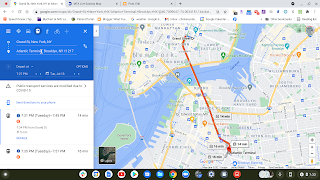 Another interesting thing I saw last week in the subway was that under Rockefeller Center which is kind of an accessible station the stickers on the ground that ask people to stand six feet apart had a little variety to them.Maybe the MTA could spend a little bit more money installing and maintaining elevators so the subway system could be truly accessible. 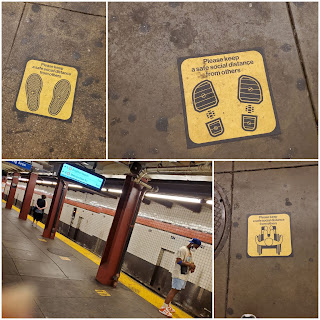 And maybe the MTA could reopen the bathrooms in subway stations so people wouldn't have to take a dump on the floor. I took this picture around noon on the 4th Avenue platform at Atlantic Avenue. There's a bathroom upstairs that's been closed for over a year. Supposedly less people are getting infected with covid because the bathroom is closed 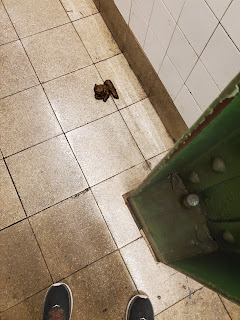 Posted by chickenunderwear at Saturday, August 07, 2021