So I wrote the blog post below 14 years ago. I was a different person in many dimensions back then.
But, yesterday for the first time in 16 years I paid for the New York City Half Marathon.It is a new course and very photogenic. A lot of people were taking a lot of pictures along the way. I didn't need those touristy pictures.I know what the Brooklyn Bridge looks like from the Manhattan Bridge. And if I want to picture of Time Square I can buy a postcard.
But along the way I wanted one picture.
8 years ago I was in NYU Langone Hospital.I wanted a picture of the hospital window I looked out of at the FDR Highway. From the room where I had a weird medical procedure called plasma exchange, and off-label non-FDA approved chemotherapy. I looked out at the East River and the FDR Highway a lot.I just 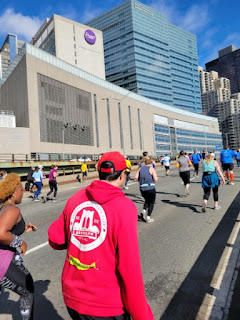 wanted a picture of me looking back at that window. And Josh took the picture before I got a chance to pose and it came out better than I even thought it would. Because I'm just running by. 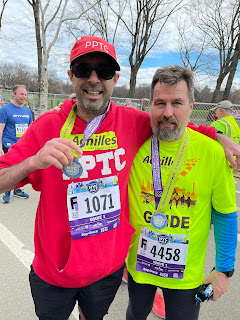 Yeah,Here's the other picture.Both of us with our medals.Josh didn't pay for his race, but that doesn't mean he ran for free. He was working very hard.

And by the way, here is continuing evidence that GPS devices are useless in the canyons of cities
This was originally published in September of 2008...........
My name was changed to protect the innocent Person #1: It is kinda humid today just like the Nike Half Marathon in August Person #2: Yea, I did that, but I did not want to pay $75 to be in a Nike commercial, I just started in the back and had a good time. Person #3: Me too, I did not pay and I even got a medal. Person #2: I got 2 medals and sold them both on EBay. Cheers and laughs from the rest of crowd! Race Starts...
Posted by ChickenUnderwear at Monday, March 21, 2022