images of my one day trip to Albany

This morning I made a one-day trip up to Albany. As is my right I wanted to take some time and yell at my government.This morning's yelling was about trying to keep people out of nursing homes and eventually getting sick and dying. But this blog post is not really about that. It's about the things I saw..

Before I got on Amtrak I got to go into the new Moynihan Hall. It is the new western extension of Penn Station. It is brand new and to see some great pictures of it click this. I also rode the Amtrak from New York City to Albany. It is arguably one of the most picturesque railroad trips you can make.For virtually the whole ride you are right up against the Hudson River. On my ride home I had a 200 mile view of the sun setting. I even got to see West Point. Click here for a video of what my trip was like.

Most of the rally was held outdoors in Empire State Plaza. I've only been to Albany a few times and every time I go I'm reminded it is the bleakest place I've ever been to. But after one spends some time In the architectural heart of Albany, one realizes it's more than just bleak. One of the people I was with said it was Soviet architecture. But when I looked at it I thought it was more Romulan. Here are some great photographs.

We actually got inside of the capital and we're able to make some noise.We all got in through different entrances and had to go into the building on different routes but we would told to meet in the war room. I thought the war room was analogy for something, a place where we would discuss our strategy. It was actually a room called The Wall Room. It was a room full of pictures and art depicting war and violence and warriors Here are some more great pictures.

But, and I know you've been waiting for it I did take one actual photograph. Between the Amtrak station in Rensselaer and the bus stop where we waited for the bus to go to Albany There was an old building that looks like it used to be a firehouse and now it was converted into a restaurant. 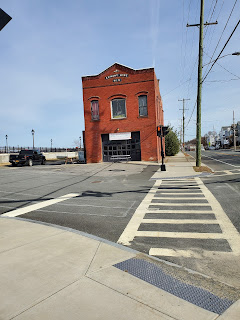 From a distance it looked like another bleak Albany building. But the words on top really made me happy.

It Says E.F. HART HOSE, But when I looked at it quick I thought it said eFart House.

After seeing a sign on a building that said eFart House I know I was going to have a good day.

Posted by chickenunderwear at Thursday, March 31, 2022