I'm not big on holidays but I always try to celebrate the Fourth of July. Usually just my planning to do something outdoors. I did that yesterday, by running a 10K, Today I'm feeling that wonderful pain, that is simply reminding me how hard I push myself yesterday. Yay me! Blah blah blah blah blah. This post is not about running.

I'm thinking about all the new Americans I've been meeting. When I was hospitalized and in rehab I spent a lot of time with nurses and their aides. The vast majority of these nurses aides were immigrants. Many from Asia, the Caribbean and Eastern Europe. First, the kindness they showed to me was far beyond anything that could ever be written in a job description. Remember, I couldn't lift a fork or even put my own glasses on or off. So I spent a lot of time with these women. They met my kids, and talked about their children. Their children; first generation Americans. Their children were all earning professional degrees or they were already doctors or lawyers or engineers. They were all proud of their children and they had a lot to be proud of.

I'm thinking of the guy who sold me a chicken over rice from a halal cart hart last week. He sore I was struggling to put the bag of food he just gave me into my larger sack so I can carry it home. He came out from behind his cart and help me get situated so I can get my food home. I thanked him and he paused for a moment and said "thank you for letting me help you". I think during that pause he was looking for those words in English because I think he says them often in Urdu.

The other day I had to take it over at 5 o'clock in the morning. The driver would've thought from his Uber dashboard that this was going to be a short trip. But it turned out to have multiple stops in multiple boroughs. I asked him and he told me he had been working all night but he still treated me with patience and kindness.Given that his first name was Palingwende and his English was not so good it was easy to assume he was an immigrant. After he help me unload all the things we picked up along the way I not only tipped him generously (with my bosses money) but after I just impulsively wished him a happy holiday I realized it might be his first Fourth of July here. So I shook his hand and wished him a happy Independence Day and thanked him for being here. In our country.

I was once online to pick up some lunch in downtown Brooklyn and noticd that the overdressed couple in front of me were holding a thick official looking envelope. At first I thought they might have just gotten married. Then I noticed the American flags on the envelope and that they were holding little American flags. I took a a big breath and asked them if they had just become citizens. They said yes and I paid for their lunch.. Years later I saw a guy on the subway holding a similar envelope and a flag. The guy sitting next to me asked him if he just took the oath of citizenship. He said yes and everyone on that subway car shook his hand He looked like he was struggling to hold back the tears

One last little story. I'm currently serving as a director on my co-op board. Since am lucky enough to have my days free I've been learning more about what it's like to maintain a 90-year-old six-story building. Right now my apartment house is surrounded by bridgework and pipe scaffolding. Were practically done with the project to make sure that the building doesn't leak and bricks don't fall on people on the sidewalk. Part of that project means attending meetings with the engineer, the project manager, the architect and the contractor is doing the work. A regular question the project manager asked for the contractor is, "How many men are working today?"On February 16 the contractors answer was "one, just me. Today is a day without immigrants" Our project manager knew that since we were a Park slope building we would be cool with that.

I know it might be too little too late and if my co-op board doesn't want to approve this I'll do it out of my own pocket.... But those guys worked hard in all sorts of weather. I think I want to buy them all a cup of coffee. So I'm gonna figure out a way to get a Dunkin' Donuts gift card to the owner of the company that did all the work. 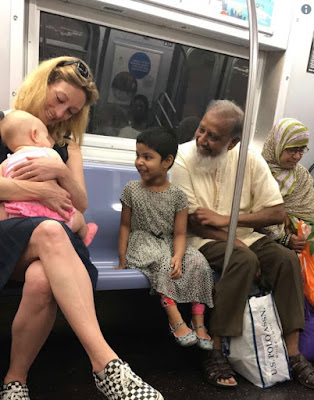 So, seven years ago I spent Independence Day in Northampton Massachusetts. They have a tradition there of having people take the oath of citizenship in public on the Fourth of July. I blogged about it here, wouldn't it be great if that was a national tradition.

I've been stalling in publishing this post because I couldn't think of an appropriate picture. Then I found the photo to the right on a blog that usually shows people committing the sin of inappropriate behavior on the subway. As a New Yorker, as an American, as a human being this photograph brings me only joy.
Posted by chickenunderwear at Friday, July 07, 2017