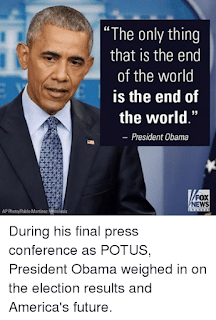 I really had no intention of making this political, but I've been thinking of this expression a lot lately. and I just Googled it and I found out it's what Barack Obama said when Donald Trump became apparently elected president. It could have been the end of the world and it still might be but it hasn't been.

So my (very first world) problem is that I am not going to run the New York City Marathon this year. The good news is that I have an overuse injury. that was a joke.... in order to keep myself from tripping over my own toes I wear ankle foot Orthotics. From a distance they look like bands that go around my calves. But there's actually a  carbon fiber rod that goes down into my shoe and there's a plate underneath my foot. It solves the problem of foot drop. It also means I'm running on a carbon fiber plate and losing all the padding that my Hookas come with. The little bone behind my big toe started not liking that. He complained by swelling. When it swells it feels like there's a electrical dumpster fire in my shoet hen the pain actually gets worse when I take off my shoe because my foot gets a chance to swell. I have a swollen sesamoid bone. Sesamoiditis.

So back to physical therapy for strengthening exercises mostly around my toes . I also had a hole drilled in the bottom of my orthotic right underneath my sesamoid bone. I think that's the trick. So this morning I tried out my new feet. 300M regardless of what the GPS says. No pain. I might try a whole mile tomorrow

Posted by chickenunderwear at Friday, October 15, 2021