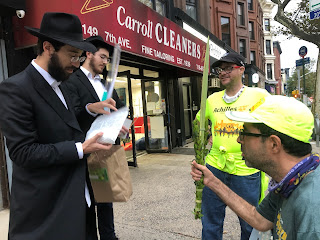 The beginning of fall is a busy season for these missionaries.  I avoid them during Rosh Hashanah and Yom Kippur because for whatever reason they don't carry money on that holiday. They are allowed to ask me to listen to a horn but they're not allowed to pay me. But on Sukkot they want me to shake a stick and some sort of dried up melon while saying some prayers. Since I didn't have to put any leather straps on my head I only asked for $5 and they were quick to agree. The cool thing was that last week I was not alone during this encounter I was hanging out with some friends waiting to go for a workout. 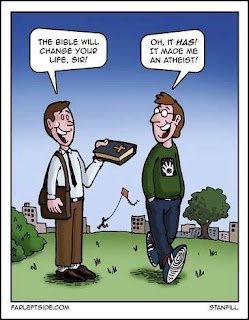 I tried to guide the conversation towards the subject of  free will and humanity, but that was useless.  It was like talking to a dining room table.  I knew this man had one and only one agenda, that was to get me to use tefillin.

That subject came up quick.  He asked me if I want to put them on.  I said sure, if you give me $20.  He instantly agreed.  After a very short and polite discussion about the timing of payment.  I performed the ritual, right there in the Times Square Subway Station.

We then had a short conversation about our personal religious histories.  He gave me $20 and shook my hand.

"Congratulations, you did a mitzvah."
"No, the mitzvah will be when I donate this money to help end the suffering in Haiti."
"Are there Jews in Haiti?"

So if yo want to do a mitzvah you can help someone in need or support one of the organizations below.

I personal know the people involved at Heartline Ministries, it is not about religious rituals.  It is about helping those who need the most help.
Posted by ChickenUnderwear at Friday, October 01, 2021