Yes, I have a picture of my daughter

Recently, I was hanging out with a bunch of other grown-ups and we started talking about our kids.We started showing off pictures.What it was my turn, I opened my phone and showed a new picture of my son and his girlfriend and then a picture of my daughter and her girlfriend. I then hardly noticed that one of my new friends stepped away from the crowd. Later that person came over to me, and in a quiet voice said ,"When I was a little younger than your daughter I came out, and my parents made me leave the house....Things got a little better didn't they."

Yep to me it's as seamless as just another dad joke.

Yeah, People ask if my twins are identical and I say no they are boy and a girl. And then they say well are they identical in personality. I say absolutely not. My son is a nerdy scientist who enjoys playing video games with his friends into the middle of the night and my daughter a politically active fashionista artist, They couldn't be more different. But they both like girls.

So below is the entire text from my daughter's thesis statement. Click here for a link to a photos of the show mostly taken by my friend Larry. 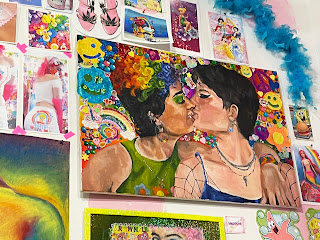 to the left is a great painting of my daughter, Sabrina and her girlfriend, Julia.

and not for nothing but this is the second time Sabrina was a guest on my  blog. Back then I wasn't allowed to say her name or show her picture

My work celebrates sexual and gender eurphoria through queer imagery, community, drag and self expression. I am doing this through drawing as well as wearable, community based art.

I have been exploring the combination of early 2000's little girls’ media along with the queer and trans experience.  Little girls' media, toys, like Barbie and Disney princesses, as well as cartoons like Strawberry Shortcake and Spongebob. As well as iconic, fashion brands like Limited Too and The Children's Place, taught the children who were assigned female at birth of my generation about heteronormative gender roles and eurocentric beauty standards, all wrapped up in a colorful, cute pink glitter aesthetic. This is very confusing and challenging for young queer and trans people, who will never meet these standards. I reference this era of media though bright rainbow color, early 2000’s cartoon characters, peace signs, flowers, smiley faces and hearts, little girls plastic charms and beads, sparkles and more. Mixing this aesthetic with queer imagery is empowering, liberating and an act of resistance to these gender roles.

Drag to me is expressing a person’s gender and sexuality to the fullest extent. This includes performance in a queer nighlife setting, where you would expect to see drag, as well daily life. It varies from elaborate costumes to a T-shirt. Whatever is the truest expression of a queer person’s gender and sexuality, anytime and anywhere. It is all about the fantasy. Living your dreams by dressing up as exactly who you want to be, even if that is not really possible in a society that is patriarchal, heteronormative, and runs on white supremacy. This liberates the person in drag and helps other queer people feel comfortable celebrating their own identity, being unapologetically visibly queer. Expressing your true self no matter where and when is a small act of protest against heteronormative society.This idea is from the Ballroom scene that started in the 1960’s in Harlem and The Bronx, by the Black queer community*.

*Read more about this in And The Category Is…:Inside New York’s Vougue, House, and Ballroom Community by Ricky Tucker

Related to this idea is the stereotypical, hyperfeminine aesthetic of my work. I am pushing against the idea that queer women have to present as masculine or non binary peoplehave to present as androgynous. I thought lesbians had to be butch and only gay guys could be feminine, because I was exposed to that narrow representation in the media. Dedication to this feminine aesthetic and way of self expression for femme lesbians and non-binary femmes is a way to show that its ok to present your gender other than how straight society expects you to, and is an act of protest against this.

Chalk pastel drawings and oil paintings have imagery that include portraits, figures and still lives. With these drawings I want to elevate queer femme lifestyle to a traditional format of representational portraits. Celebrating and honoring it by putting it into the context of fine art that historically excludes and oppresses queer and trans people. Male artists are encouraged to exploit and sexualize AFAB* bodies through figure painting, For example, the reclining Venus and Odalisque paintings that you see from the renaissance to the 19th century.**

Making still lives with sex toys and stuffed animals instead of bowls of fruit and wine glasses, and boldy representing my sexuality through nude figure drawings is an act of protest against the exclusionaty tradition of art history, as well as a celebration of queer sexuality.

** read more about this in Why Have There Been No Great Women Artists? by Linda Nochlin

Another part of my practice is centered around making wearable art for myself and the queer comunity, as a reference to drag. This includes hand embroidered and beaded clothing as well as silkscreened clothing and handmade jewelry. These are produced and sold, online as well as at queer-centered flea markets. All the funds are given to mutual aid supporting queer BIPOC.

When people buy my clothing and jewelry they walk around wearing hand-crafted items that aggressively, unapologetically celebrate alternative queer and trans femme lifestyles. Showing everyone that its is OK to express your true gender and sexual identity. As well as monetarily supporting the members of our community who face oppression on multiple levels. The work has to support and uplift the community in a tangible way, not just illustrate it. By doing this I want to encourage people, especially the pratt community, what they could do to support people with less privilege then them. Redistribute your wealth! Give money to mutual aid and directly to queer BIPOC.

Lastly, my art is for queer people. I made the Go Home Breeders mixed media piece in order to contextualize my work for the cisgender straight white people in the Pratt community. To spell it out, GO HOME! This party is not for you, your feedback and opinion in the work is not wanted or helpful. Look, learn about my community, and respect our lifestyle that I have represented through my work. Consider and reflect on your privileges. Feel uncomfortable. And then give your time and money to support people who have less opportunities then you.

Mutual Aid Organizations to contribute to:

Posted by chickenunderwear at Monday, May 02, 2022