What do statues of Nathan Hale and Christopher Columbus have in common? Nothing

This morning I spent about an hour hanging out on the steps of City Hall holding a sign while other people took a few minutes to yell at the government. (Actually most of the speakers were elected officials, and I don't know why they were yelling, they should be actually inside city hall doing something. But that is really a completely different topic.)
Well waiting to go through security so I could be near the steps of City Hall I realized that before 9/11 you can just go there and eat your lunch but now you need an appointment and a reason. I was kind of excited to snap this picture of the statue of Nathan Hale. Cuz I figured it was such a nice day I would walk over the Brooklyn Bridge and take a picture of Christopher Columbus on the other side in front of Brooklyn's Borough Hall
It was a nice walk.I think it's been the first time I've been up there since the cyclists got their own lane down on the roadway. The oblivious tourists up there had no idea what it was like when they were squeezed into half of that wooden sidewalk. I also noticed for the first time that the word Watchtower was replaced by welcome on top of the buildings in Dumbo. No more religious fanatics owning all that real estate and not paying taxes! And I also stopped to pee in the bathroom In Cadmen Plaza. It's a truly unremarkable bathroom but the fact that there is a payphone in the building that still has a rotary and a 212 area code is outstanding.
Oh, so you want to know what these statues have in common.They were made by different artists. But neither of these artists nor anyone ever recorded what Christopher Columbus or Nathan Hale actually looked like. So the artists got to make them look like whatever they wanted. Or maybe they were self-portraits. 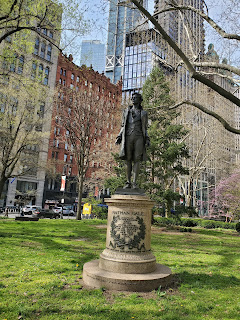 So to the left is a crappy picture I took of the statue of Nathan Hale.I could describe the image as a statue of a white guy dressed in what people wore in 1776.The statue is green and it is on a concrete platform. Behind the statue are lower Manhattan buildings. You could read more about the statue here as well as seeing more pictures. "Since no life portraits of the patriot spy exist, Frederick Macmonnies’s work offers a romantic interpretation of Hale" 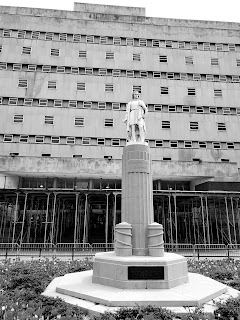 To the right is the crappy picture I took of Christopher Columbus's statue in Brooklyn. It looks like a statue of a guy wearing a skirt.  Here is the official parks department story about the statue and its history. The pictures in that website aren't much better than mine. And here are different ways people like to draw Christopher Columbus. And by the way there are police barricades surrounding this statue and the other one in Central Park because Christopher Columbus was not such a nice guy

Posted by chickenunderwear at Thursday, April 21, 2022