I didn't get to vote when I was a high school student. I turned 18 in June and then for two years I went to Hofstra where I would assume I came back home to vote because I voted as often as I could . Maybe I got an absentee ballot . I never felt very connected to Hampstead . But, in my third year of college I transferred to Stony Brook. There, I got involved in Progressive politics. I moved onto campus and felt a little bit more connected to that University but then I found out I couldn't register to vote there.  Not if you lived in a dorm.

I got involved in an organization called NYPIRG, the New York Public Interest Research Group.

We marched around in circles complaining about the fact that we weren't allowed to vote on campus. Picketing. We got some media attention but in my three years as an undergraduate living on campus there I never got the right te bote on campus. They helped me get an absentee ballot so I can vote back in Brooklyn. As a grad student I moved off campus and was able to vote in Stony Brook or East Setauket or Port Jefferson Station. A pissed the locals off up there but F them,  now I was a local.
I didn't give any of this much more thought until about 30 years later my son is going to Stony Brook  and living in the dorms. He also turned 18 in the spring so his first election was when he was away at school.  I asked him if he got to vote and he said "yep".  I asked him if you voted absentee or in the local election. "I don't know".
At first my Dad instincts kicked in and I felt like saying " What do you mean you don't know?? Who did you vote for?"  but I let that go.  And I did find out that he voted in Suffolk County. He voted without thinking twice about it. Then I realized that back in the 80s I fought in a battle that I did not win and people continued in my place and continue to fight and eventually they won. The victory is that my son was able to vote in Suffolk County without even thinking about the battle.
So there's that.
Over the past 25 years I probably ran over the Brooklyn Bridge over a thousand times.  Back and forth about twice a month training for the past 35 marathons. Sometimes good weather sometimes bad weather. But I had a lot of time to think about The Pedestrian path up there. I wrote this in 2010.  I thought back then it would be a good idea to put back the staircases around the towers to keep the bicyclists off and give them the whole of the Manhattan Bridge. Or, take the Brooklyn Bridge away from the Department of Transportation which really doesn't care about the guest regions and give it to the parks department or to Brooklyn Bridge Park which does care about pedestrians. None of that happened. 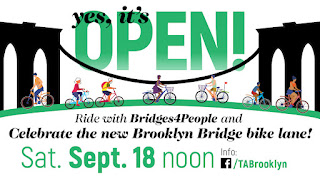 But today I marched over the bicycle free pedestrian path on the Brooklyn Bridge.
It wasn't my plan and I really didn't do much to help make it happen but I'm really glad it happened. Now there's enough room for pedestrians and tourists up on the Brooklyn Bridge.
The fine folks a transportation Alternatives did a great job  in both getting the bike lane put onto the roadway and and having this little celebration. There were a lot of photographers at the celebration and when I find their pictures I will add them to this blog. 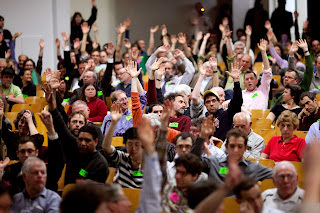 but the weird thing is while I was looking for pictures of the parade I did come across the transportation Alternatives website for the borough of Brooklyn . I could confidently say that they have not update the picture on the cover and at least seven years . Maybe seven and a half years the cover photograph shows a picture of me that must have been taken before May of 2014. Because since then I have been unable to hold my hand up in that angle or keep my wedding ring on my hand. https://www.transalt.org/brooklyn 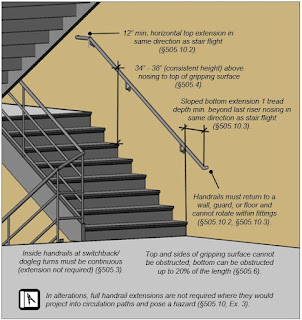 And in other news....  It's really a good idea for me to hold on to the rail when I use a staircase. Especially when I go down.  To make things more complicated, I really should not hold on to the rail with my left hand.  I don't have enough grip strength to make that helpful. So basically I need to stick to the right when I walk down stairs. I've become pretty atun to what a proper rail should be like. At the top of the stairs it should start before you're actually on the stairs so you can hold on before you start walking. Same thing at the bottom. And it should be a specific height.  Here are the legal requirements on what an ada-compliant staircase should look like. Except in that picture of the good staircase rail is on the left as you would walk down the stairs. That wouldn't do me much good.
for the most part handrails in the subway system meet the specifications. Sometimes the real doesn't extend a foot or two past the stairs because it's old and there's no wall there but the height is acceptable. Accepting the train station where I go all the time to get to the B / Q train. the stair on my side of Flatbush Avenue had a rail on the right that was significantly lower than every other raiI ever incounted. a couple of weeks ago it occurred to me to do something about it. I went to the MTA website and made an accessibility complaint .
Below is a screenshot of my correspondence with the MTA. I honestly assumed they were blowing me off,  in that this is the reply that they would send someone when they did nothing because they looked around and said everything looks fine to them. 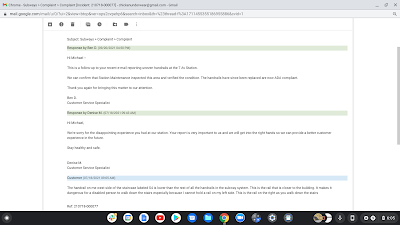 Response by Ben D. (09/20/2021 04:50 PM)
Hi Michael --This is a follow-up to your recent e-mail reporting uneven handrails at the 7 Av Station.We can confirm that Station Maintenance inspected this area and verified the condition. The handrails have since been replaced are now ADA compliant.Thank you again for bringing this matter to our attention.Ben D.Customer Service Specialist
Costomer (07/18/2021 09:05 AM)
The handrail on me west side of the staircase labeled S4 is lower than the rest of all the handrails in the subway system. This is the rail that is closer to the building. It makes it dangerous for a disabled person to walk down the stairs especially because I cannot hold a rail on my left side. This is the rail on the right as you walk down the stairs

well, below are the pictures I took this afternoon. They raise the rail by 5 or 6 in. Sometimes you can do something. 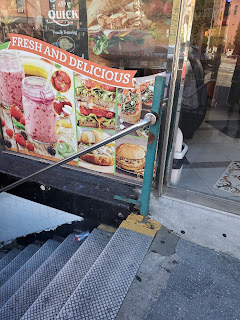 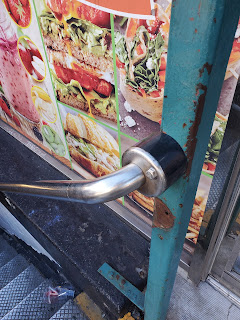 I think you can see the old hole 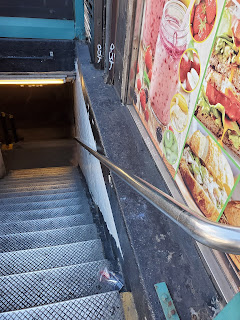 yeah, it's just not a couple of steps.

Posted by chickenunderwear at Saturday, September 18, 2021