So yesterday when I was running the Staten Island half a marathon my tow caught on a piece of asphalt, and I had a quick introduction with the ground. I scraped my knee my elbow and a little bit of both wrists.

I was really fine. In fact the whole episode was a great metaphor for my life. I was running, I fell, I got up.Shit happens. In fact I was lucky to be with the people I was with. And I wasn't with them as a coincidence. It was a plan.As an athlete with a disability I run with guides. John and Julie ran every step with me. They helped me up and without them there I probably would have walked off the course. But a weird thing happened when I was falling.

My new friend and guide John told me there's a word for that.

“Tachypsychia” is a neurological condition that distorts the perception of time, appearing to make events slow down or speed up. While we don’t hear often hear the word much in conversation, most of us have experienced it—whether during a traumatic accident or some other stressful moment.Slow-Motion Emotions 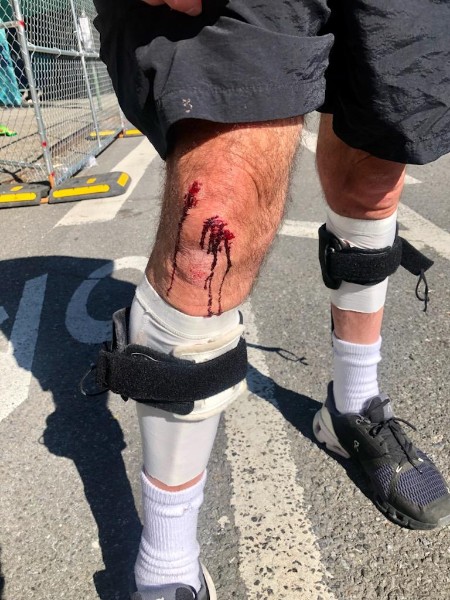 I couldn't remember the word John used so I had to look this up.It's almost like I didn't believe him since the kind of word I would make up. But he's a firefighter and had to learn how to neither fight nor flight so maybe he uses this concept in dealing with danger. And anyway in looking it up I found out that people go bungee jumping so they can actually enjoy this sensation.I'm not going to go out of my way to do this again.

In any case the Staten Island half marathon was not a total bust. Even with the fall I was able to run at the same pace I hope to run the marathon at in 4 weeks. I'm actually happy to have gotten to the medical tent at the finish line without jumping in a truck.

Here's an update from 7 days later.I fell again on a long training run this time I stuck my toe on a piece of concrete that was left on the asphalt by some lazy construction workers.Less went through my mind as I was flying in the air. More specifically......  "Not again!".  Hoping this is not a trend. Only twice in 2 weeks.

Posted by chickenunderwear at Monday, October 10, 2022