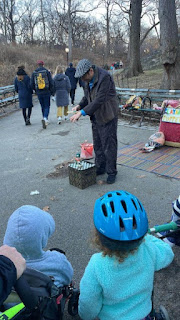 My phone buzzed on New Year's morning while running a race.It turned out that my Florida family was visiting.So I went home and changed my smell and met them in Central Park. Trying to find people on their way to Central Park is kind of tough, and my cousin kept sending me messages That she thought were helpful but not so much."We are heading to Central Park by 5th". Yeah, Central Park has a few miles of Fifth Avenue near it. But I figured out they were near The Zoo they sent me this picture to the right. The description on the picture was "we are at the puppet guy just past the children's zoo". I didn't look very hard at the picture but I knew there's usually a busker just north of the zoo,  in the park. I should have actually looked a little harder at the picture because I could have responded that his name is Ronnie.He staffed the birthday party my kids had when they were in kindergarten at Puppet Works.New York City is a very small town.

Then we gathered up there five kids and headed down to Chinatown.My cousin commented to me that he thought five kids was easy compared to having twins. No, in fact it's the other way around.I had two kids at once, but we had one agenda. We fed them bathed them put them to sleep all the same time. And they kind of entertained each other. His kids all have different agendas. Five agendas. Not so easy. 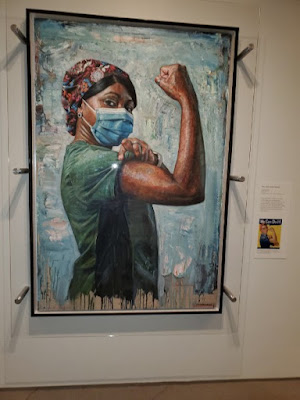 Anyways, the Florida family wanted to do a museum day.The Museum of Natural History and then next door, The New York Historical Society had a special exhibit on the Jewish Deli. (That exhibit was about as interesting to me as the Harry Potter exhibit would have been. But it gets people to pay the admission fee.)  After I slept in the museum of natural history I really felt no need to go back. But, believe it or not, I've never been to the New York Historical Societies museum.The plan was that the family of seven would meet me at the deli exhibit at 3:00 p.m.knowing they would be late, I got there around 2:30 so I can enjoy the museum.The painting is called nurse Tracy and a better and authorized reproduction can be found here and here. Having spent an inappropriately long time in the hospital this pees really struck a cord with me.She looks like all the nurses who kept me alive. And of course the real model for this works at NYU Langone.

I've said this before but let me try to put it in other words.I really don't know anything about art, but I have learned that it's not a bad idea to go to museum and look at the stuff.People with a critical eye have determined it's good stuff.Just sit down and try to figure out what's good about it. Sometimes you can find it on your own. 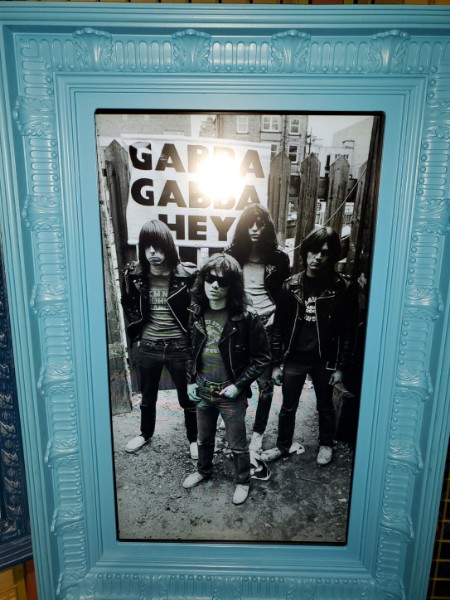 To the right is an image of the Ramones standing in front of a sign that says Gabba Gabba Hey. It's kind of weird to see this in a museum now because based on this photograph I chose how I dressed for about 10 years of my life.
Below is something that doesn't really look like a big deal. At first look it would look like a college diploma but it is actually the actual Pulitzer Prize given to Robert Caro for writing the Power Broker. When I got to the end of that book I remember thinking to myself that this is why books went awards.It was really neat to see it.If my career path years ago would have stayed in academics, this would have been my highest accomplishment. 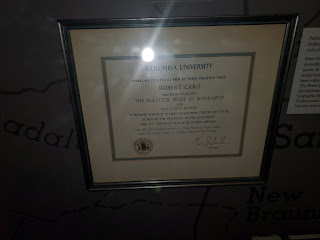 Posted by chickenunderwear at Thursday, January 05, 2023